Do you realize that nearly 300 corporate executives have visited the White House this year to exchange ideas with President Trump and others from the administration? "Persuasive Business Leaders Parade Through White House," is the New York Times headline.

Did you see where G.E. CEO Jeff Immelt said that CEOs must publicly express their disagreements with Trump policies on immigration or healthcare or the environment or trade because "we're cowards if we don't."

Have you seen the Roy G. Biv range of CEOs' reactions to the Trump administration, as they consider how to contend with a volatile public conversation on what were already complicated subjects on which they had already taken variously tentative or bold stands.

And then there was Trek Bicycle Corp.'s president's reaction to the administration's tax plan, over the weekend? "Look, I don't need a tax break—Trek doesn't need a tax break," John Burke told Business Insider. "We're going to succeed and fail in the market based on how good our products are and how good our services are. As a member of the community, we have a moral duty to be a good corporate citizen, and one way you're a good corporate citizen is you pay your taxes." (He wasn't finished: "So it's treats for everybody. For corporate America, you get a lower rate, and you get to keep your deductions. And for all the individual taxpayers, you get a lower rate. We're 19 trillion frickin dollars in debt and everybody got a treat. And I just go, 'You're kidding me.' You call that leadership? I don't.")

And we're not even talking about the CEOs of United Airlines, Under Amour or Uber—or the vast majority of CEOs who are struggling mightily enough just trying to communicate compellingly and credibly with their customers, suppliers, investors and employees.

And you work in executive communications and you're not attending the CEO Communication Summit next month, to get access to exclusive research on CEOs' attitudes about communication, to talk all these issues over with your colleagues at, among many others, Google, Mastercard, Eli Lilly, Corning, Audi of America, Unum, AARP, Sun Life Financials, Duarte—and the CEO of Texas Capital Bank?

And in Montreal, in June?

Well then, I guess I just don't understand some people. 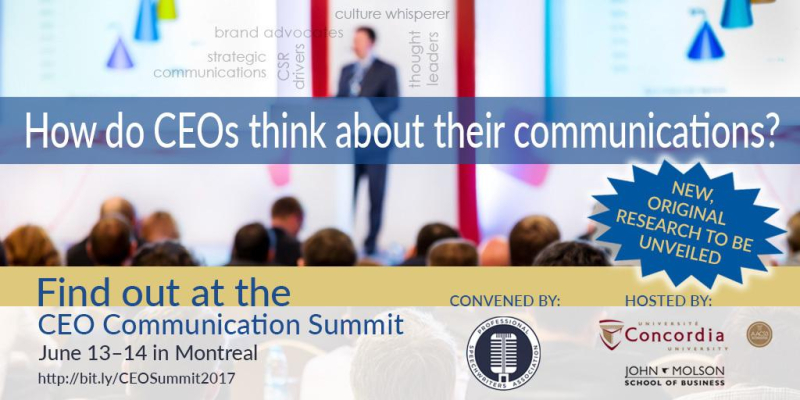