I've been reading about the Revolutionary War lately, as self-help.

"These are the times that try men's souls," wrote Thomas Paine in late December of 1776 when the Continental Army was in tattered retreat—many of the soldiers were actually naked—and most observers from both sides of the war were ready to call the British victors. "The summer soldier and the sunshine patriot will, in this crisis, shrink from the service of their country; but he that stands it now, deserves the love and thanks of man and woman. Tyranny, like hell, is not easily conquered; yet we have this consolation with us, that the harder the conflict, the more glorious the triumph."

The screed he wrote, titled "The American Crisis," was printed and passed around camps and read aloud to freezing American soldiers at the insistence of General Washington. The pamphlet is credited with retaining many troops who had fought some early winning battles but had been in retreat for months and were planning to quit the army when their contracts expired Dec. 31. The troops would cross the icy Delaware River and win the Battle of Princeton, partly on the strength of Paine's rhetoric—and probably that very first sentence, that rhythmically acknowledged reality. 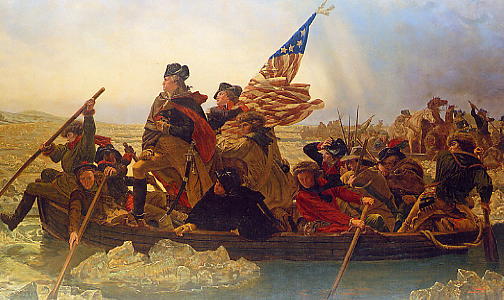 This Trump election victory has shocked a lot of people, including middle-aged liberals like me. We feel we've made our gains and suffered our losses but we've seen many kinds of social progress and we feel with varying degrees of justification that we've worked for that progress. And just when it seemed that some of those advances were going to be anchored by a woman president who was going to more or less continue the policies—now all appears in grave jeopardy, and we're preparing for a winter in Valley Forge.

When you're hurt or discouraged or exhausted, "take a knee," the late Lt. Col. Mark Weber advised in Tell My Sons, the book I helped him write three years ago. "But you can't stay there."

We can't stay there, my friends. We have children who shouldn't see us staying there. We have work to do. And goddamn if I don't believe we have lots of energy left, whether we know it or not. Our American ancestors—people led through wars and famines and racial movements by people like Washington and Lincoln and Roosevelt and King—they have shown us the spirit and demonstrated the stamina.

"I have not yet begun to fight," said Captain John Paul Jones in response to a British request to surrender.

"Our republics cannot exist long in prosperity," said founding father Benjamin Rush. "We require adversity and appear to possess most of the republican spirit when most depressed."

These are the times that try our souls, Paine wrote, six years before we won the war.

Let's not let these times find our American souls wanting.