Hillary Clinton may have gone about it clumsily and even somewhat oafishly, but she was trying to say she understood the point of view of many of the people who support a candidate who she finds reprehensible. Read the whole quote:

You know, just to be grossly generalistic, you could put half of Trump's supporters into what I call the basket of deplorables. They're racist, sexist, homophobic, xenophobic, Islamaphobic—you name it. And unfortunately there are people like that. And he has lifted them up. He has given voice to their websites that used to only have 11,000 people—now have 11 million. He tweets and retweets their offensive, hateful, mean-spirited rhetoric. Now some of these folks, they are irredeemable, but thankfully they are not America. But the other basket–and I know this because I see friends from all over America here—I see friends from Florida and Georgia and South Carolina and Texas–as well as, you know, New York and California—but that other basket of people are people who feel that the government has let them down, the economy has let them down, nobody cares about them, nobody worries about what happens to their lives and their futures, and they're just desperate for change. It doesn't really even matter where it comes from. They don't buy everything he says, but he seems to hold out some hope that their lives will be different. They won't wake up and see their jobs disappear, lose a kid to heroin, feel like they're in a dead end. Those are people we have to understand and empathize with as well.

Go find me a section of a Donald Trump speech where he tries to identify parts of Hillary Clinton's following, and asks his base to understand where they're coming from. (Now Clinton, for her part, could try a little harder, and at least acknowledge that some of Trump's following exists because she's the Studebaker that they've had for 30 years and they just want a new car that has different things wrong with it. Also, "irredeemable" is simply not an American term.)

In her speech, was Clinton a little rough on the racists, sexists, the homophobes, zenophobes and Islamophobes that everybody knows is a part of Trump's following? Did she overestimate their share among Donald Trump's followers? Should she not have put a whole group of people in a rhetorical "basket"? I don't know; I think I would have been tempted to go for the more alliterative "dumpster of deplorables."

In any case, the reason she's getting hammered for her remark about the "basket of deplorables" is the very reason that Vital Speeches of the Day was founded in 1934 by founder Thomas Daly, who believed a large part of the nation's problems then was the purposeful editing of leaders' speeches to distort the message they were trying to send. That's why Daly declared back then that “it is only in the unedited and unexpurgated speech that the view of the speaker is truly communicated to the reader.” 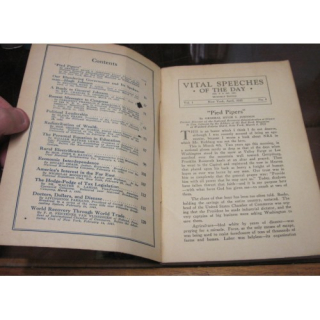 This is why Vital Speeches still prints speeches in full and without commentary today. This is why Vital Speeches still exists today. Not that we expect American citizens to read a soundbite on Facebook and go running to our website to read the speech stem to stern, the way they used to buy Vital Speeches off the newsstand. But future generations of scholars, when they research this bizarre political campaign and every well-argued side of any issue, will be able—and thus will be obligated—to read the whole speech, and see exactly what Hillary Clinton meant by "basket of deplorables," and what was the whole message she was trying to convey. They may conclude she is an arrogant elitist. Once they've read the whole speech, they'll have that right. But not until.

Here's what a speech is, friends—and what a speech will always be: A speech is, everybody sits down and shuts up as long as the speaker talks. A speech is not just a series of standalone declarations (unless it's structured that way, in which case it's a crap speech). No, a speech is a whole argument, or a series of arguments much more elaborate than a single phrase inside a single sentence. And when an audience member is asked what a speech was about, the audience member (or media member) should not say, "Aw, Clinton just called Trump supporters a basket of deplorables."

Because Clinton, in this case, and so many politicians in so many cases, did not "just" do any such thing. Any more than Mitt Romney "just" walked out and boasted that he had "binders full of women."