Consensus is she won. But it's not overwhelming. Uber time. Discuss amongst yourselves.

Hillary just stung with that jab about bullies at home or abroad. (Most of her other canned lines have been flaccid.)

The European speechwriters are genuinely pleased to hear that America's word is good.

Speechwriter: "If you're explaining, you're losing."

People are congratulating me on not being a racist.

"The last politician who sniffed this much was Marion Barry."

"This is Roy Cohn. Don't give any ground."

Five hundred murders is not a lot of murders by the way.

Two Gore speechwriters are debating whether Trump's eye-rolling is hurting him like Gore's sighing did.

"A very against police judge."

The host's 12-year-old son is listening to the debate on the radio in his bedroom.

The freaked-out speechwriter quietly slipped out and drove off without saying goodbye to anybody but the host.

This wise room seems divided on how the debate is going.

"Take advantage! That should be ad. Are you kidding me?" 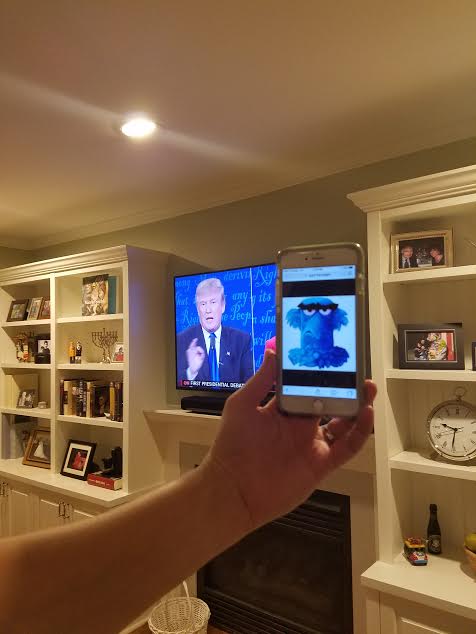 He's got the Mussolini thing going on.

I think I feared that he would be able to control himself. My fear is subsiding.

"No wonder you've been fighting ISIS your entire adult life"?

The freaked-out speechwriter is now morose, and pacing around the kitchen and scratching at his hair.

Who is crunching chips in here? And now a debate erupts about whether Clinton actually signed NAFTA, or whether he only introduced it.

Gerstein notes that she hasn't yet mentioned President Obama.

The freaked-out speechwriter is on his phone. No, he's up to get another drink.

My man Trump seems to be having a Rubio drymouth moment.

But it's quiet in here.

"Donald, it's good to be with you." The room giggles.

The candidates are Donald Trump and Hillary Clinton. Speechwriter: "Oh."

Me and Dan Gerstein, boss of Gotham Ghostwriters. 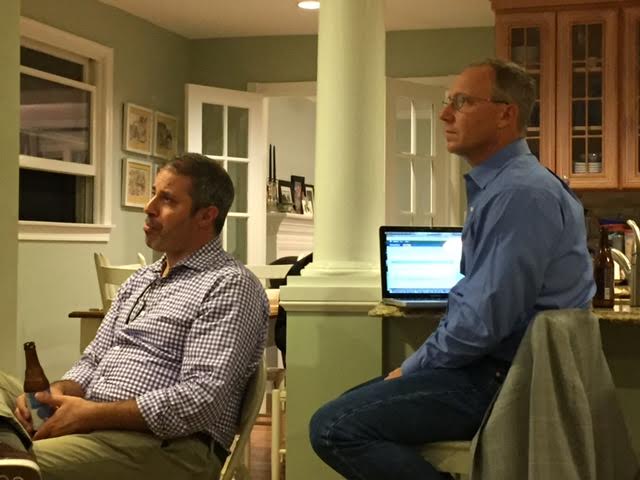 I'm with a dozen professional speechwriters, from the U.S., Canada and a couple countries in Europe. One invited scribe didn't come, another is almost petrified in dread, and is conspicuously sitting off to the side. The Europeans have told me they are afraid this campaign's level of discourse could spread to Europe, where politicians take their cues from Americans.

Read in Howard Cosell voice: Not since the undefeated Muhammad Ali challenged the undefeated Joe Frazier on March 8, 1971 in Madison. Square. Garden. Never since that night, lit so brilliantly by the attendance of a galaxy of superstars that included Frank Sinatra. Norman Mailer. Carol Channing. And everybody else who was anybody from New York to Hollywood has the nation. Anticipated. So breathlessly. A clash of two titans with such differing styles. Such different stories. Such perfectly opposed points of view …

You could write the rest. I'll be live blogging the debate tonight, but this time a bottle of liquor won't be my only company. This being the eve of the 2016 World Conference of the Professional Speechwriters Association, I'll be in the home of a D.C. speechwriter, at a gathering of professional speechwriters who will remain as anonymous in this account as they do in their daily work. But I do expect to quote some of their remarks and insights here. I also expect my point of view will be affected by being so speechwriter-surrounded. But that might make it fun. And frankly, I'd be afraid to watch this debate alone.