So wrote Landon Y. Jones, in The New York Times travel section a couple of months ago. His words harmonized with my motor as I threaded skinny roads through Michigan to Detroit, blasted down highways from Detroit to Cleveland, wound through crowds in Cleveland and scribbled my way to Pittsburgh just for good measure. And back to Chicago, Monday night.

I knew from the very start of this trip that this was the road I was meant to be on, despite the ominously urgent well-wishes I received from my friends and family. Usually when I head off on a motorcycle ramble—I turned over 22,000 miles on the old Triumph on this trip—people hope I make it safely to my destination. This time, they seemed to hope I wouldn't.

After a lovely and profound visit with a long-lost relative north of Detroit, I headed for Cleveland.

On a ride into the unknown, you wonder. In this case, you wonder where you're going to write in mobbed downtown Cleveland. And then your pal Craig Coffey hooks you up with Joe Kubic, CEO of Cleveland's leading ad agency, The AdCom Group, who gives you an air-conditioned office space in which to quietly contemplate the action outside, every day of the convention. 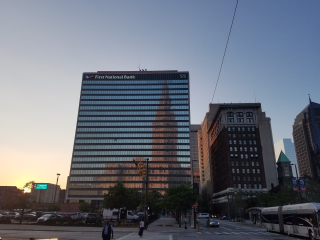 You wonder who you're going to write for, and your Cleveland speechwriter pal Diane Suchetka introduces you to her ex-Cleveland Plain Dealer colleague so, you can write for them.

You wonder what you're going to write about that's different from what all the other reporters are writing about, and a speechwriting scandal breaks out.

You wonder if you're really going to be able to write a useful piece about the big Trump speech by listening to it in a noisy tavern full of Cleveland Democrats, and your speechwriter pal Eric Schnure introduces you to his former student Whitney Nichols, an RNC ops chief who scores you a guest pass inside the arena.

And still you wonder what you're going to say as you walk numbly out of the arena after watching a legitimate American presidential candidate deliver a 70-minute speech that felt like 30 even to you, and that set everyone around you afire, while you received texts from your sister, like, "What is it even like to be you right now?" Walking to your motorcycle, you talk to your wife on the phone and she tells you she's sick with fear and encourages you to write from the heart.

You ride through the Cleveland midnight, telling yourself you're too tired to write, but ideas flood you so you whisper up to the boathouse where your host Tom Gillespie and his family are sleeping and you pull a beer out of the refrigerator and you take your laptop out onto the pitch-black deck and you write 1,500 words in 90 minutes. They come out of you so fast and so straight that you're sure there's not even a typo in them. You're not sure they'll hold up in the morning, but you have an idea.

In the morning you add some quotes to the piece from the notes it was too dark to read last night, you read it one more time, and you post it. You're not sure it's great but you are sure it's what you think. Fifteen minutes after posting it, you get a text from a discerning reader and friend. "It might be my favorite thing you've ever written." And then it spreads online further than anything you've written in some years, and maybe ever.

And importantly, you feel you've said exactly what you have to say about something important—which, after many months and years of primarily focusing on matters beyond writing, feels almost embarrassingly good. And you savor that feeling all the way to a happy golf outing with your speechwriter pals Shawn Bannon and Michael Tsarcyzk, in Pittsburgh.

And on the long ride home, you know you have so many people to thank for this, and you know you'll never be able to do it.