It had been a long time since an old client of mine had last cracked a beer together. He's a South Side Chicago guy moved to Phoenix, where most of our time together has been spent in airy, trendy desert bars that all have valet parking (in a town where the airport is called a "Sky Harbor").

But my man was home for his old man's birthday, so we arranged to meet at a pub for lunch way down on Western and 104th. But the pub was closed on a Monday, along with all the other respectable Irish pubs down there. For restocking, probably.

One bar was open on Western. Wrong's, up near 99th. "Why Wrong's?" asks Chicago MetroMix rhetorically. 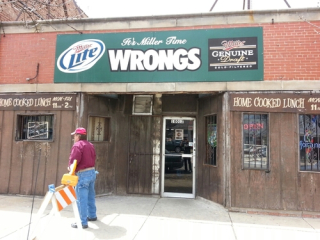 "Twenty or so years ago the bar was called Right's, and when it changed hands the new owners went for a name flip. This bar caters mostly to locals, many who actually remember the bar when it was Right's."

Right's or Wrong's, it was a Southside bar for sure:

The beer coasters were little squares of berber carpet.

The Cubs were losing 4-0 to the Reds and everybody was happy as hell about it. "Ha! An' I thought the Reds were lousy this year!" (Southsiders root for the White Sox, Northsiders root for the Cubs. The Southsiders think all the Northsiders, and thus all the Cub fans, are homosexual. "How many queers does it take to flip over a police car?" goes the standard Southsider joke. "We won't know 'til the Cubs win the World Series.")

When we walked in, a guy was asleep face-down on the bar with a half-eaten basket of fries next to his oblivious head.

And wen we walked out, two long beers and lots of fancy conversation later, the guy was still sleeping, his personal rock bottom not seeming to affect the mood in the place one way or the other.

And my pal thanked me for coming all the way down for the meeting.