As communicators, we often complain that the leaders we serve don't want to say anything meaningful. They prefer platitudes to specifics, bromides to personal opinions and dullness to daring. As one speechwriter said last year in response to a Professional Speechwriters Association survey, they need to be convinced "that it's okay to be interesting."

But of course leaders have very good reasons for their bias toward blandness. Millions and billions of them.

Over the holidays, I read an old issue of Vital Speeches—March 1, 1941. I read it closely. 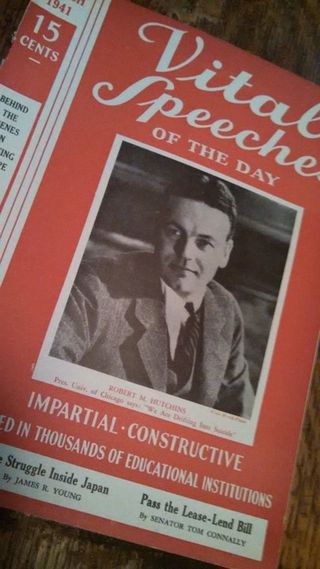 And I noticed that the ideas that were most clearly and memorably expressed were also the most laughable.

In a speech on railroad regulation, the president of the Pennsylvania Railroad Company complained about business being complained about. "If one observes the undercurrents in political and social life of today," M.W. Clement told the Pittsburgh Traffic Club, "it will be found that they deal with certain conceptions which are loosely expressed by catch phrases which 'label' them, and which people often do not analyze: such as 'power' and 'wealth'; men who 'run' America; men who 'control' industry; men who 'control' wealth …"

Perhaps it was for this speech that "air quotes" were invented?

Most of the speeches in the issue, not surprisingly, debated whether or when the United States should enter what was referred to as "the war in Europe." With Hitler on the march and England on the ropes, the majority of the speeches argued against U.S. involvement.

Though that sounds remarkably familiar to the rhetorical carpet bombing our some of our politicians lay on the Middle East today, the sentiment is less embarrassing than the well-articulated argument for staying out of the war by Robert Maynard Hutchins, the young and powerful president of the University of Chicago.

"We Are Drifting Into Suicide," was the title of Hutchins' speech, also delivered over radio, on Jan. 23, 1941. His central argument was that the United States did not have democracy down well enough to go imposing it on other nations by intervening in the war. Hutchins listed human rights violations and democratic imperfections in America that "leave us a good deal short of that level of excellence which entitles us to convert the world by force of arms. … We Americans have hardly begun to understand and practice the ideals that we are urged to force on others."

He called for a "new moral order in America," concluded that refining American democracy was the first order of business, and warned that people calling for European intervention were "turning aside the true path to freedom because it is easier to blame Hitler for our troubles than to fight for democracy at home. As Hitler made the Jews his scapegoat, so we are making Hitler ours. But Hitler did not spring full-armed from the brow of Satan. He sprang from the materialism and paganism of our times. In the long run we can beat what Hitler stands for only by beating the materialism and paganism that produced him."

Just as speechwriters of yesteryear, today's scribes are in grave danger of writing such stuff, because their bosses are always demanding it. By virtue of their positions in society, our leaders are encouraged by their boards, their investors and their campaign contributors, to hold some seriously peculiar and sometimes borderline insane positions on things. Positions that will preserve the calm that's keeping everybody's beautiful yachts afloat.

And that's often why our leaders don't want to say anything. Because they'd rather say nothing, than say these things. They'd rather play rhetorical rope-a-dope than lash out madly in defense of the status quo. And sensibly so.

My dad used to say old people are quieter than young people, "Because old people have more to be quiet about."

So do many of the leaders we work for. We'll always push them to be clearer and more candid in their communications, because as writers, we advocate for the audience and the public, too. But we should not pretend to be puzzled by their preference not to.