The river crossing was different coming the other way, two days later. Everything was different two days later. I was stunned at the inaccuracy of my memory. Wrong about how long the four-lane stretch was, surprised at the proportion and order of the towns I thought I’d memorized, amazed at the adjustments my memory had made to the scale of things, photoshopping most of them for the better. In reality, only Princeton, Ill. looked like this. 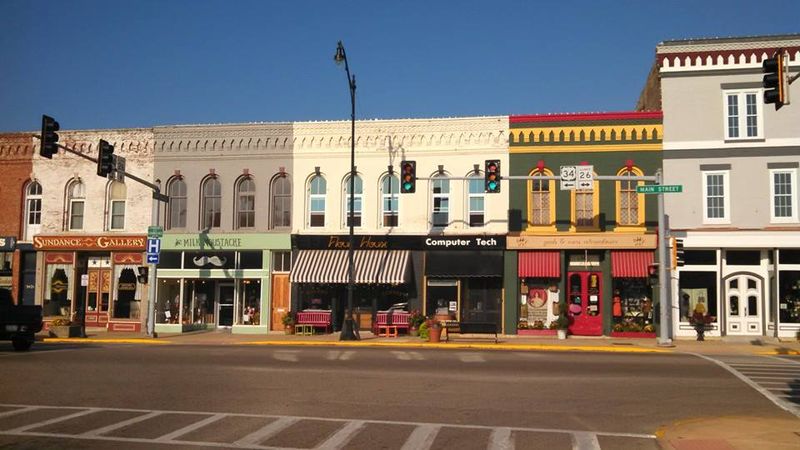 The whole ride was a trip back through a dream, in the opposite direction. I could have sworn there was a pink elephant bathing in that pond with my old landlord on his back!

The difference between 34 W. and 34 E. was exacerbated by the utter stillness of Labor Day in the country. I rode through many towns without seeing a soul; I was looking for a tavern for lunch, but even most of those were closed. I resigned myself to wait until the big city in Kewanee, where they’d just be wrapping up their annual Labor Day Hog Days Festival and some places would have to be open. But then I spotted Mary’s Restaurant, on the eastern outskirts of Galva. There were a few cars outside.

Eight locals and a middle-aged biker couple nursed beers in dim light. The kitchen wasn’t open, so the only food available was chicken soup and chili, simmering in crock pots. Six dollars, all you could eat, out of Styrofoam bowls. And so utterly home-made, passing it up would have been like snubbing your grandmother.

“You must be Mary,” one of the bikers said to the woman behind the bar.

“Who else works on holidays?” Mary asked, rhetorically.

I kept to myself, avoiding eye contact by googling Galva. It was settled by Swedes—there’s a sister city in Sweden called Gävle—and 80 percent of the population is Scandinavian. Including Mary, it looked like.

On the way home, I pulled off to look at the Hennepin Canal. A little later, I rode past a no-trespassing sign, a quarter mile down a narrow path through a soybean field to the base of a wind turbine, for a picture.

I rode through the parking lot of a rollicking biker bar in a grain mill near Langley, but didn’t stop for a beer because I wasn’t feeling bold enough to walk alone into a place called Psycho Silo.

In the next town I saw another church sign—someone ought to collect these messages in a coffee table book—that said, “Living without God is like dribbling a football.”

And I rode to the back of a cemetery at Wyanet—“because why not?” I chuckled to myself, as I had become an easy laugh over these miles—and lay down in the grass for a nap. Though I was exhausted, unseen insects tickled my arms and neck each time I started to drift off.

Curiosity fades with energy, and by the time I saw signs for 88 on the city side of Oswego, I thought hard about jumping on the tollway. I should have done so. But stubbornness outlasts everything and I’d decided I’d do the whole round trip on Ogden Avenue. So I sat at a hundred red lights, burning from above in the 90-degree late-afternoon sun and baking from below by the heat of my own engine, as Rt. 34 turned back into Ogden and a record-long strip mall and then the city and a family of eight sisters almost killed some of themselves running across Cicero and cops ran a red light just because it was the ghetto and I almost crashed my bike trying to get a stupid video shot of the approaching skyline as I emerged from the bridge at Ogden and Western.

What kind of a life is this? It’s a rigorous life, at least. It’s our life, for sure. It’s important to know there is also other life, not so far away—and to see it, as clearly as we can, to the extent we can will ourselves to slow down and look, make eye contact and see, calm down and communicate.