"Abraham Lincoln and Winston Churchill rode to glory on the back of the strong declarative sentence," wrote William Zinsser, 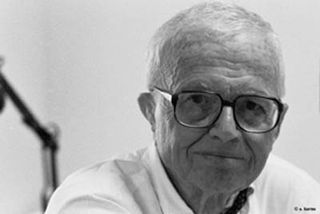 author of the classic writing guide, On Writing Well, which my first boss Mark Ragan used to quote to me on the rare occasions when I needed guidance even then.

Mostly, Mark wanted me to cut out spare words (even though he wasn't paying me by them). "There's not much to say about the period," Zinsser said, "except that most writers don't reach it soon enough."

The New York Times obit on Zinsser ends with this story:

In 2012, Mr. Zinsser sent a written invitation to friends and former students “to attend the next stage of my life.” He said glaucoma had caused “further rapid decline in my already hazy vision,” forcing him to end his 70-year career as a writer.

But he announced his availability “for help with writing problems and stalled editorial projects and memoirs and family history; for singalongs and piano lessons and vocal coaching; for readings and salons and whatever pastimes you may devise that will keep both of us interested and amused.”

Blind, open and eager. I hope I get there one day.