I was talking on the phone yesterday with the resourceful and enthusiastic man who is handling social media for the World Conference of the Professional Speechwriters Association, which takes place in NYC May 22-23, and for which it is not too late to register.

He asked me if I might do some social media work ahead of the conference, to build broad excitement and interest ahead of the event. (Which is already a Who's Who of serious speechwriters. 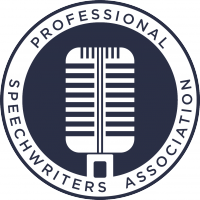 I said I could try to do some tweeting on the conference, but I noted that that as conference organizer, chairman and emcee, my schedule leading up to the conference wouldn't afford me time to "play a lot of grab-ass."

This is the upside of being a natural-born clown: You entertain yourself. I laughed on and off the rest of the day, and I'm still laughing now.