A few years ago I wrote a magazine profile of a monomaniacal suburban mayor, and then had the temerity to attend the next year's "State of the Village Address."

In his speech, the mayor didn't address my article directly—though he reportedly had his lieutenants buy up every copy of the magazine in town so that locals wouldn't see it—but answered obliquely by reading a quote from President Theodore Roosevelt's 1910 speech, "Citizenship in a Republic." 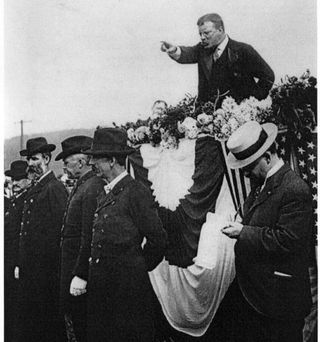 It is not the critic who counts; not the man who points out how the strong man stumbles, or where the doer of deeds could have done them better. The credit belongs to the man who is actually in the arena, whose face is marred by dust and sweat and blood; who strives valiantly; who errs, who comes short again and again, because there is no effort without error and shortcoming; but who does actually strive to do the deeds; who knows great enthusiasms, the great devotions; who spends himself in a worthy cause; who at the best knows in the end the triumph of high achievement, and who at the worst, if he fails, at least fails while daring greatly, so that his place shall never be with those cold and timid souls who neither know victory nor defeat.

Since that amusing day, I've heard a number of leaders—usually beleaguered mayors, actually—use that speech, which is more commonly known as "The Man in the Arena" speech. If Toronto mayor Rob Ford hasn't used it yet, it's only because his enthusiasms and devotions have simply been too great to afford him a chance to read old speeches.

Do leaders think that the audience (of followers) doesn't notice how self-serving and impossibly condescending such a quote is, coming from a leader?

Dear Arena Man: First of all, you're not Teddy Roosevelt. Neither was Richard Nixon, who also quoted the speech. And neither is Miley Cyrus, who has part of it tattooed on her arm.

More important: We "cold and timid" critics—we journalists, activists, employees, customers and interested citizens of every stripe—we are the ones who notice the dust and sweat and blood on your face, who point out your errors and shortcomings, who decide if your daring has succeeded or failed. And for that matter, reap the rewards or suffer the consequences.

We "critics" would never declare that society's institutions could run without you. That would be stupid. But worse than stupid is your suggestion that the critic does not count.

Not that a mayor—or a CEO or a president—should not discuss the matter of where we all stand vis a vis "the arena." It's a terribly important ongoing conversation, in a democracy.

But I prefer to quote from a more obscure writer than Teddy Roosevelt. Larry Ragan was my first professional mentor, at Ragan Communications. Larry thought a lot about insders and outsiders, and how they relate to one another, and in a Catholic magazine, he wrote a little prayer for them both.

The outsiders raise hell. they demonstrate; they organize marches. They issue reports that excoriate the establishment, challenge the status quo, appeal to all who thirst for justice.

The insiders? Often dull. The insiders speak a different language: they know the tax tables, the zoning variations, the assessment equalizers, the square-foot cost to educate the kids. You'll find them on the school board, city government, on the village board. Ordinarily not word people, they have mastered the art of the platitude.

Outsiders are often wild. At first, they don't seem to make sense. The first black kids who sat at a lunch counter and refused to move were outsiders. The first marchers to Selma were outsiders. Surely it was an outsider who first proposed the shocking idea that the generic "he" is a sexist word. Dorothy Kay, who in the 1950s stopped Manhattan traffic to protest atom bomb tests, was an outsider.

Please God, let us always have outsiders and give me the grace, in my better momnets, to know how to be one. But I'm torn because I want to be an insider too. The insiders resist the first answer that comes to them: they have heard it before. They are offended when they see the world's complexities reduced to slogans shouted into a microphone or preached at a town hall meeting. They are saddened when they hear someone argue that God is on his or her side, and they wonder why God doesn't speak so clearly to them.

Sometimes you've got to feel sorry for the insiders. When they win, few know of their victory. When they go wrong, their mistakes are branded as evil. Often they share the goals of the outsider but continue to say, "things aren't that simple."

The world is filled with people who like to feel they are right. Insiders are not always certain they are right. They are unhappy when they must resist the simplicities of popular sloganeering. So when we tip our hats to outsiders, as so often we must, let's not do so with such vigor that we fail to give two cheers to the insider.

If not in those words, isn't that a little closer to what a leader—even a besieged leader—ought to say?

I expect to be doing some reporting here on IABC next week. And I'll hope to keep all of this in mind.