The scene of last week's sad sacking of all 28 photojournalists from the Chicago Sun-Times, as seen through the expendable lens of erstwhile Sun-Times staff photographer Al Podgorski. 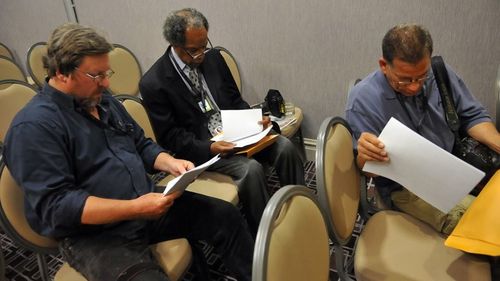 In the center of the frame is Pulitzer prize-winner John H. White, mentor to many of the other photographers laid off. In the wake of the layoff, White said his assignment is not from the Sun-Times, but from God. "Lamplighters to the world," he calls photographers.

The Sun-Times is reportedly training its reporters to take picures and make video. Meanwhile, the true communicators among the photographers laid off will go on doing what they've always done, somehow.

"Every time I capure a moment, it's timeless," White told CNN's Howard Kurtz, clicking his camera twice. "It's forever. It's like a light. It cannot be contained. … We're there for people. We're their eyes."

Communicators communicate, whether you pay them or not.