Late in his life my dad had a cleaning lady, a big, rough woman who for some reason saw fit to refer to him not as "Mr. Murray," or "Tom," but simply "Murray."

"Murray!" she'd say, startling the octogenarian. "How many books you wrote?"

But I've got a foreword under my belt now—a foreword to a pretty damned useful book that we've published at Vital Speeches, called 10 Steps to Writing a Vital Speech, by star speechwriter Fletcher Dean. 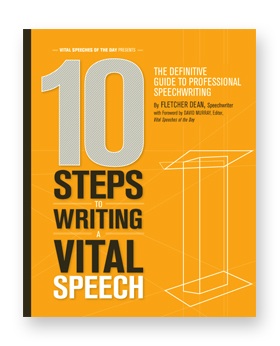 10 steps "is a brisk guide through the skills that make speechwriting such a valued and lucrative communication specialty," as we say in the book jacket. "It teaches readers how to analyze audiences, target them with your message, interview the speaker and research the speech, form your material into a compelling story, give it structure, write it with style, create visual aids and coach your speaker through the delivery process."

And in my foreword I describe how as a young man I went from feeling sorry for speechwriters as failed writers who now claimed to have no authorial pride or moral interest—to admiring them, as good liars.

The book doesn't officially go on sale until January but advance copies can be purchased. If you write speeches, or want to, I sincerely recommend this book.