Stephen Banko won the Grand Award at this year's Cicero Speechwriting Awards, for a speech about making sense of his experience in Vietnam. To dedicate a new Purple Heart Memorial in Buffalo, N.Y. May 1, he gave another one.

“We clung together so savagely in that rarefied air,” Banko said at the May 1 dedication of a Purple Heart Memorial in Buffalo, N.Y.:

We shared everything, from our last sip of water to our lives. I am alive because of a friend such as that. I was cowering behind a bullet-swept anthill with a wrecked machine gun in my hands and a battalion of North Vietnamese soldiers in my face. I would have surely died a sad and lonely death that terrible day in that nameless place had it not been for a guy named John Holcomb. He ran across fifty meters to bring me another machine gun and took four bullets in the chest. His reward for that heroism was a posthumous Medal of Honor. Mine was the honor of writing testimony that formed the bulk of his award citation and to grow old and fat and bald, reveling in the joy of watching grand kids grow up. 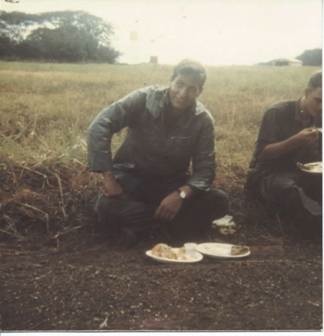 Hardly a day in my life passes when I don’t recall the sacrifice that kept me on the planet. Hardly a day goes by when I don't wonder if the life I’m living is enough to honor that sacrifice.

Read the speech in its entirety at the Vital Speeches website.

Note: The photographs, of Holcomb (sitting, above) and Banko, were taken shortly before their company was ambushed on Dec. 3, 1968 and sustained 87% casualties. Holcomb was killed, Banko lost a kneecap. Of his photo, Banko tells me, "I was 22 when that picture was taken. I felt 62." 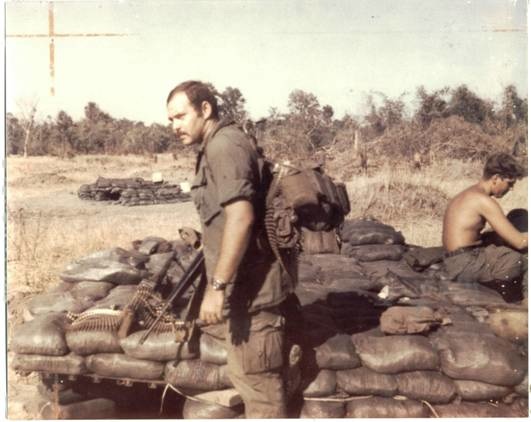 And this is the speech, recorded by Banko in a studio, that won the Cicero Grand Award. One reason to be happy this Memorial Day is that some soldiers survive war with their hearts, however damaged, still very much intact.